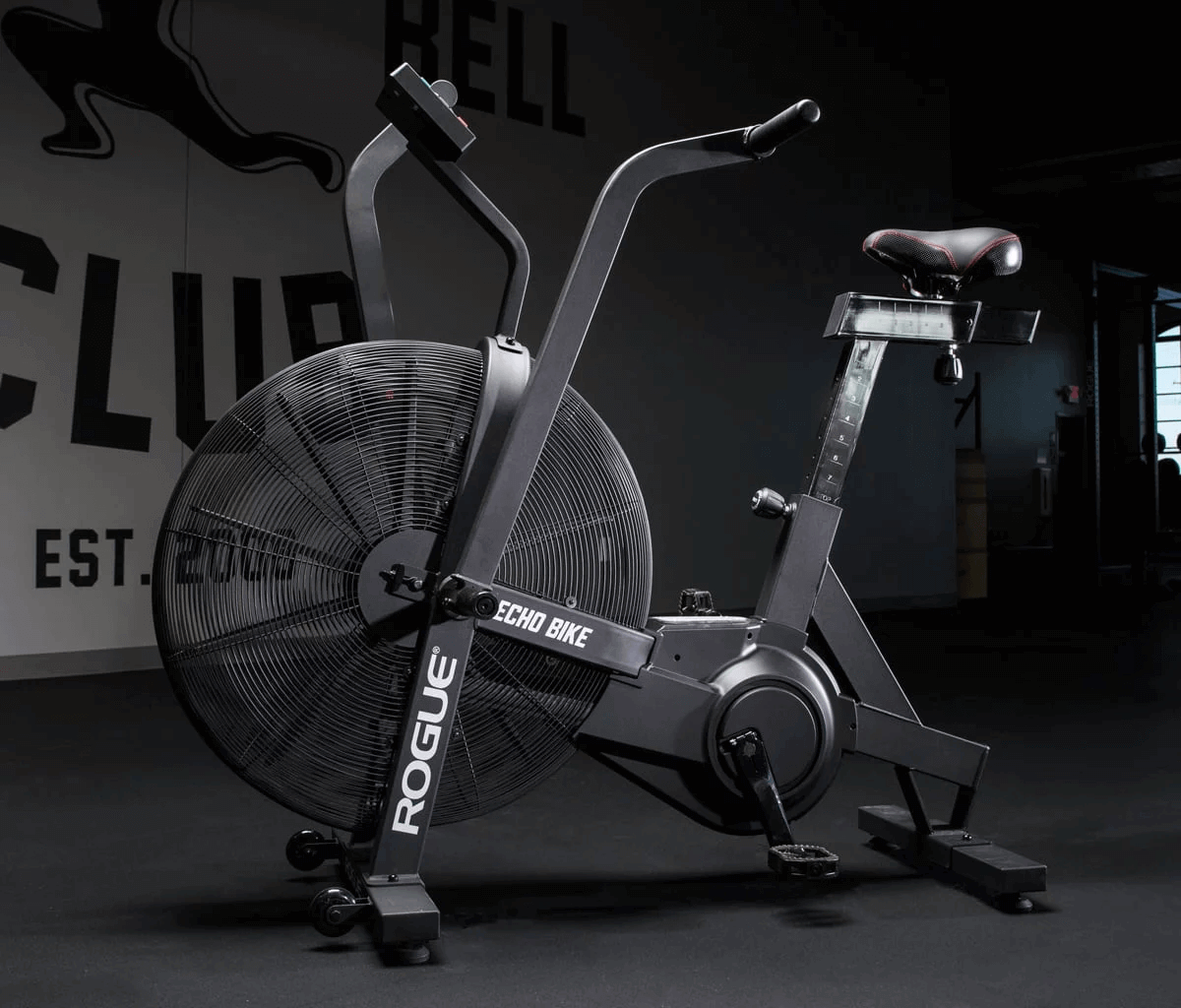 The Rogue Echo Bike is undoubtedly one of the best Air Bikes available to buy currently, and it just so happens that it's one of the least expensive among the top competitors in the Air Bike space. The Echo bike is built like an absolute tank and can withstand many types of intense workouts you’ll be throwing at it for many years to come.

The Echo Bike is equipped with a precision steel blade belt-driven system, which closely resembles the belts used in automobiles. Thats a big plus, since these belts are tough, quiet, and will be able to withstand anything you plan on throwing at it. 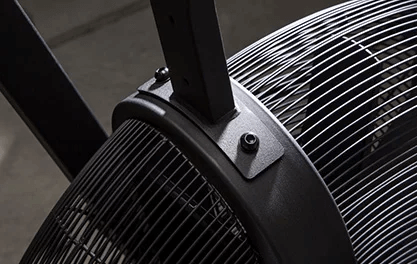 The Rogue Echo Bike is fairly quiet compared to the competition. You’ll hear the wind driving through the big wheel when hitting the machine hard. Older Schwinn Airdyne and the Assault AirBike typically produce a bit more noise due to some of the equipment construction utilizing mostly metal frames unlike the Rogue Echo Bike which is made of nearly all metal. You definitely won’t hear the same creaking noises like the other machines give off.

The Echo Bike is definitely the beefest of the Air Bike bunch, weighing in at a whopping 127LBS with a 350LB weight limit. To compare, the Assault AirBike weighs 98LBS. The additional added weight however won’t make it difficult to maneuver and take it around from one spot to another. The added weight adds to the overall sturdiness of the bike, keeping it from wobbling like some other Air Bikes on the market. Its reinforced steel construction also gives it the rigidity and balance to help eliminate sways and bumps during even max output bursts, and the fan’s steady response delivers a uniquely consistent, smooth riding experience.

The Rogue Echo Bike also comes equipped with a mounted 6” LCD console and features a crystal clear, high contrast display. You’ll be able to select or create from a wide range of modes, including intervals, Target (Time, Distance, or Calories), and Heart Rate Tracking (requires heart rate transmitter to send data). The LCD console runs on just two AA batteries, which are included. The console also has some quick select buttons on the right side of the monitor which makes it easy to see during use. 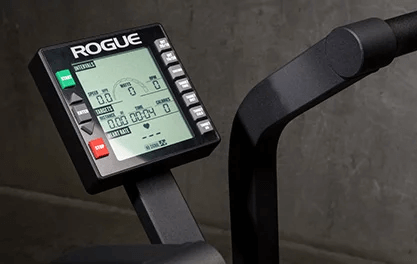 Weighing in at 127LB, 350LB weight limit, the Echo Bike is not the wobbling breed of exercise bike. Its reinforced steel construction gives it the rigidity and balance to help eliminate sways and bumps during even max output bursts, and the fan’s steady response delivers a uniquely consistent, smooth riding experience. For added stability, we’ve included rubber leveling feet under each base tube. These feet adapt to your flooring and provide added “stick,” helping to level the bike even if it’s not on a level surface. 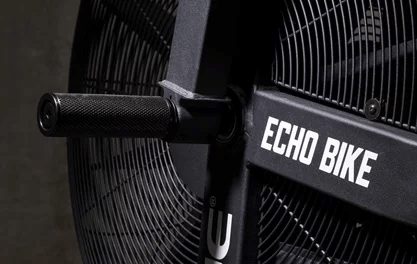 The mounted LCD console measures 6.375" x 6.375" and features a crystal clear, high contrast display. Athletes can select or create a wide range of modes, including Intervals (20/10, 10/20 or a custom Work/Rest interval), Target (choose a goal Time, Distance or Calories and the console will count down based on your selection), and Heart Rate Tracking (please note that a heart rate transmitter is required to send data, but is not included). The console runs on two AA batteries, which are included.

The Echo Bike is built with a range of durable steel tubing 2x3", 1.25x3", and 1.625x3.125" steel finished in a texture black powdercoat. The adjustable padded seat locks into 8 different height settings and 5 front-to-back settings, and the 1.5” diameter rubber grip handles are welded directly to the bike’s arms for added rigidity. A steel step plate is provided along with knurled 4.5" long rotating foot pegs and metal pedals. The fan itself is a belt-driven, precision steel blade.

Assembly is required to set-up the Echo Bike, but all necessary tools and black hardware are included standard with your order, along with easy step-by-step guidelines. While the fully constructed bike is a beast, we’ve included a set of 1" wide polyurethane wheels at the front of the unit, allowing it to be rolled around the gym or stored out of the way with ease. 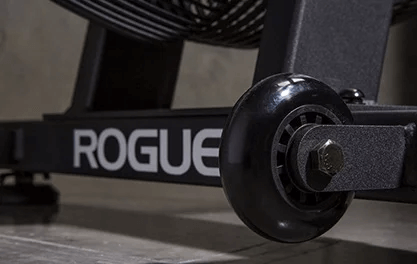 Optional Echo Bike accessories can be included with any order at an additional cost. This includes our mast-mounted Echo Bike Phone Holder and the Echo Bike Wind Guard, a plastic shield that prevents air from blowing back into the rider’s face. The Echo Bike is also compatible with optional accessories from other suppliers, including Shimano. 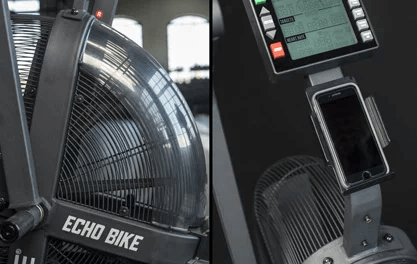 That being said, Schwinn has been manufacturing quality bikes for over a century now and they’ve been a leading innovator in air resistance technology. With the Airdyne AD Pro, Schwinn has developed its most complete all-purpose stationary bike to date—with a perimeter-weighted flywheel design, powerful solid steel cranks, and doubled-coated steel body construction. Multi-position handles allow the rider to use a vertical or horizontal grip, redesigned foot platforms reduce slip and improve push-off, and a larger, padded seat offers optimal comfort. The universal rail and clamp system even lets users swap in their own customized seats if they choose.

On the other end, the Assault AirBike is a heavy-duty exercise bike designed directly from the feedback of athletes and coaches. The Assault AirBike reinvents and retools nearly every component of the traditional fan bike, from the frame construction to the crank, pedals, monitor and more. Keep in mind this bike utilizes a chain driven system which will produce much more noise when working the bike to peak performance.

The Rogue Echo Bike is a great choice for any garage or home gym – especially for HIIT (High Intensity Interval Training) workouts. It’s built like a tank, requires nearly zero maintenance, it’s quiet (for an air bike), and it’s one of the cheapest best value air bikes on the market. 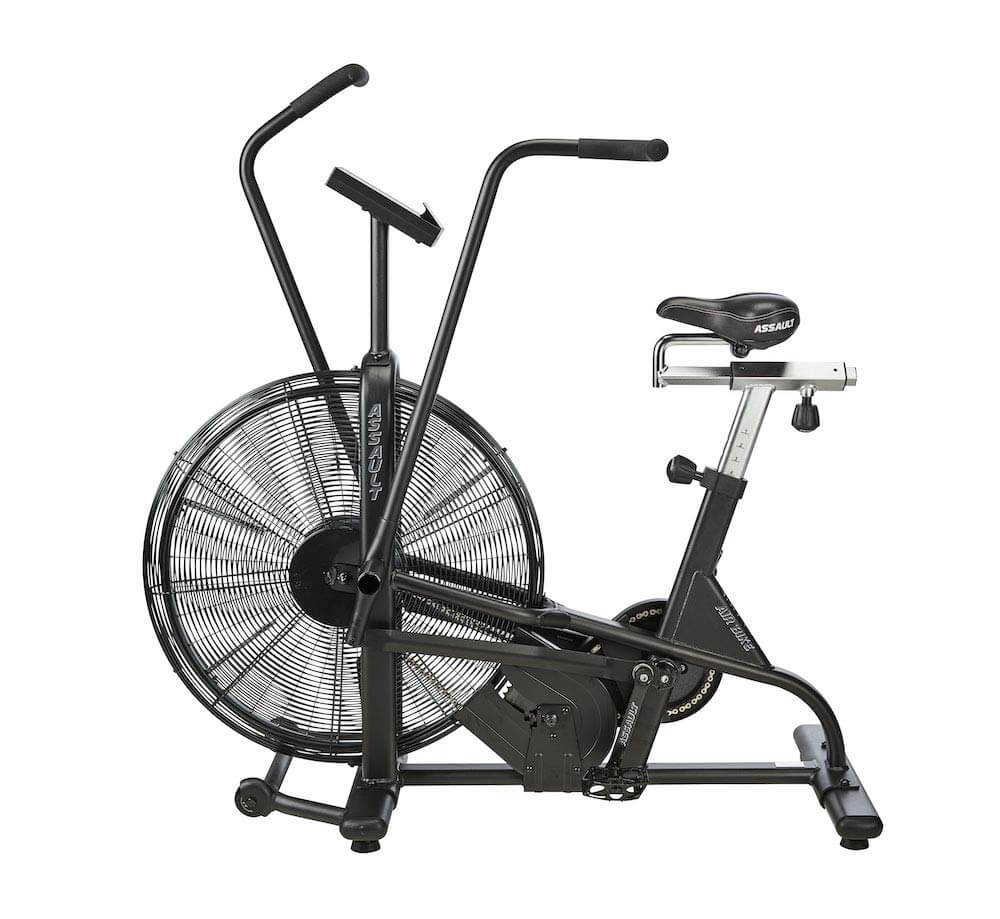 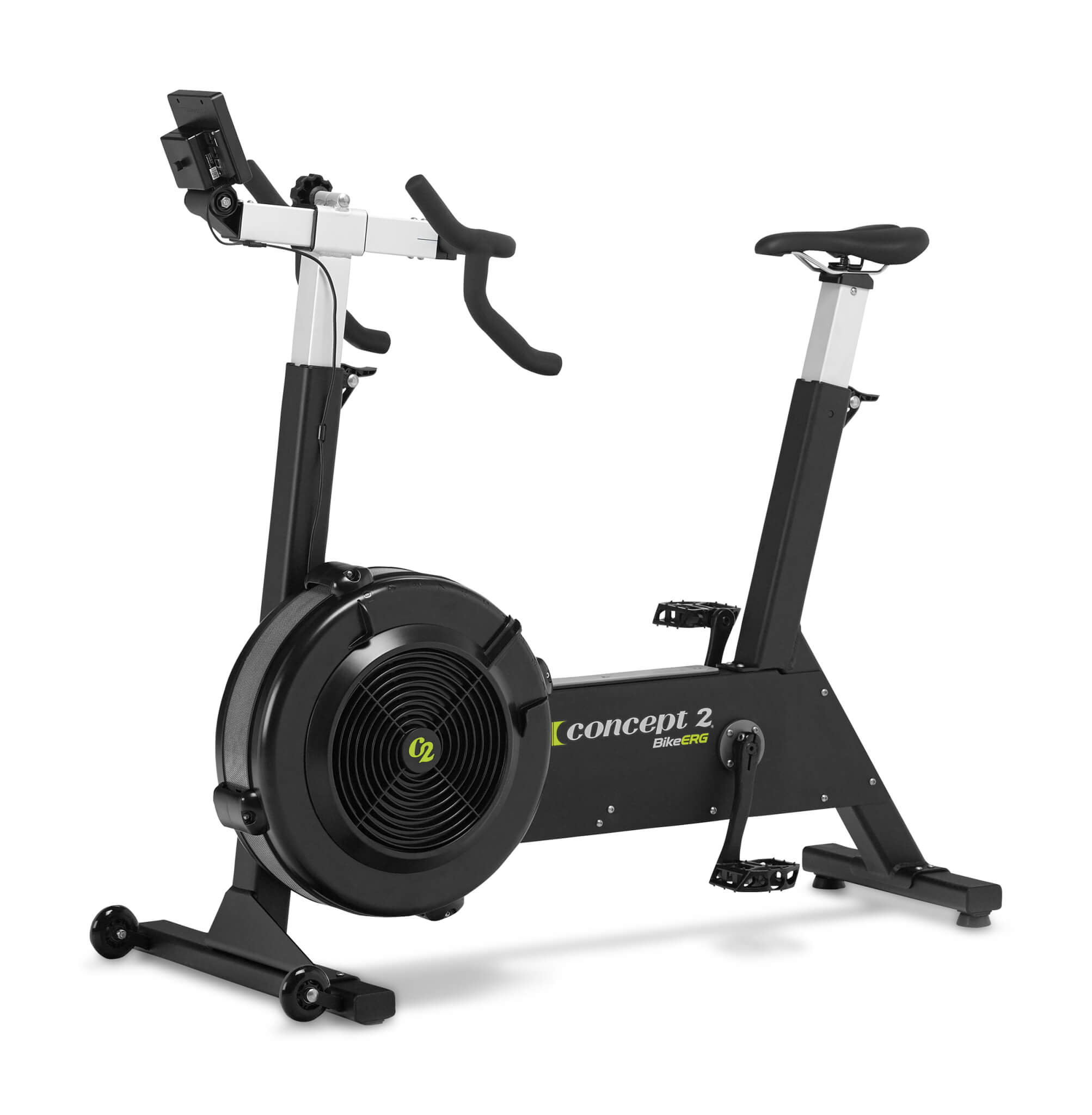 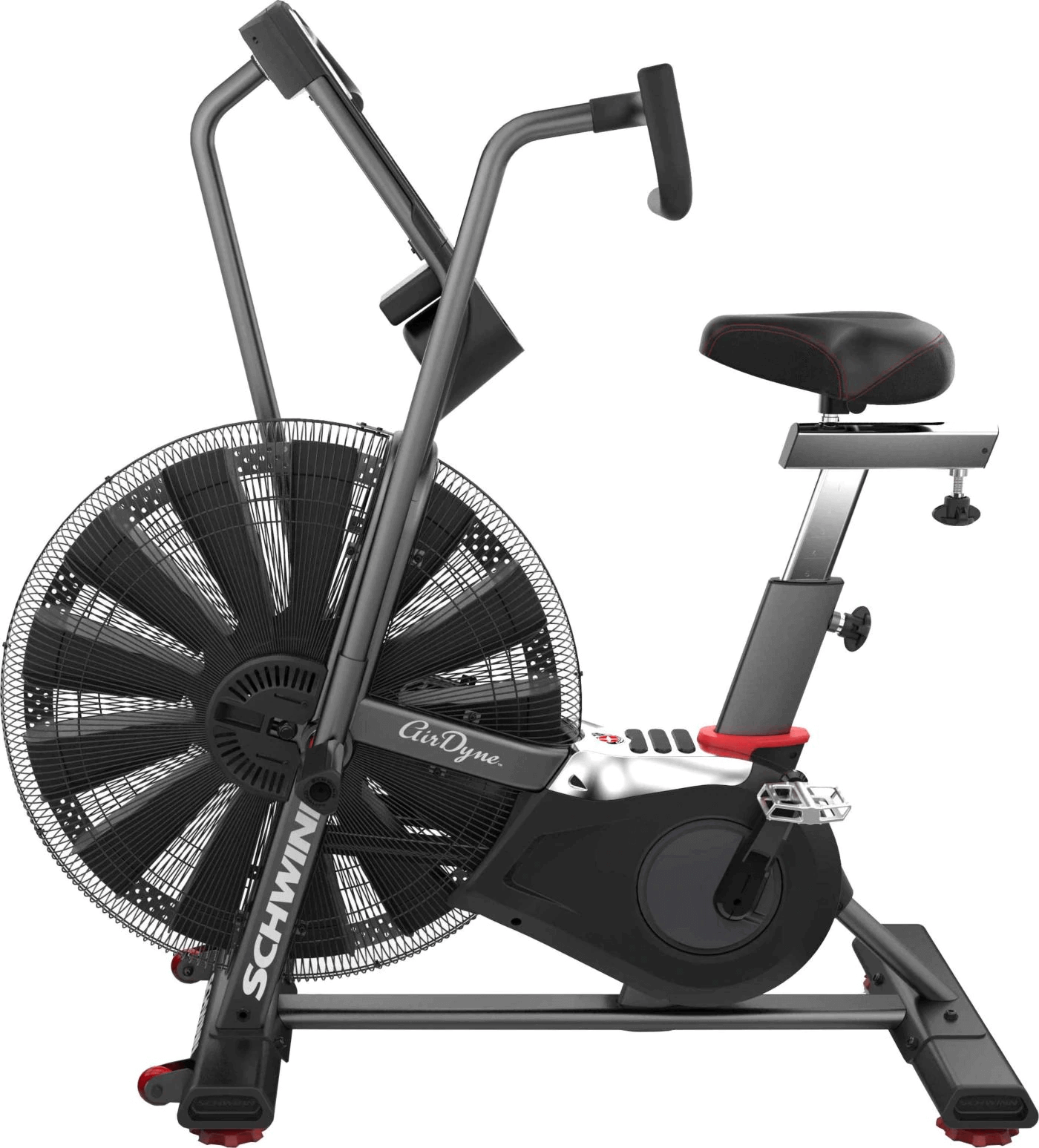